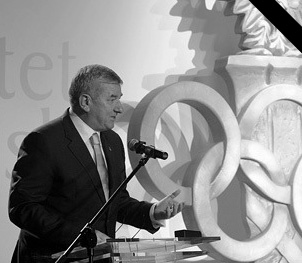 Piotr Nurowski was born on 20 June 1945 in Sandomierz. His first contacts with sport date back to the time when he attended a local high school. Not only did Piotr Nurowski take part in the compulsory physical education classes but he also voluntarily co‑organized inner- and intra-school championships in team games or track and field competitions. During theses events he served as juror and … a sports speaker.

These interests, developed by Nurowski during his youth days at school as well as his passion for social work, later resulted in him becoming an activist of the youth and sport movement. He became known as an energetic and thriving young man during his studies at the Faculty of Law of the Warsaw University, which he graduated from in 1967. Developing his sports interests, Piotr Nurowski took part in a nation-wide competition for a radio commentator and... won it. Later, he apprenticed under the masters of the journalist profession such as editor Tadeusz Pyszkowski, who at that time was the head of the sports desk of the Polish Radio.

Being a sport activist and volunteer he was strongly dedicated to his beloved “queen of sport” - Track and Field. He became a member of the Executive Board and, at the age of just 28, was also elected President of the Polish Athletic Association, becoming one of the youngest Presidents in Poland and on the international arena. He held this post in years 1973-1976 and 1978-1980, which was a period of great – not just Olympic - achievements of Polish sport (Montreal 1976, Moscow 1980). The experience which Piotr Nurowski gained in sport area was profitable in diplomacy – he subsequently held the posts of: First Secretary at the Polish Embassy in Moscow (1981-1984), civil servant at the Ministry of Foreign Affairs, Department of Asia, Africa and Australia as well as Counsellor at the Polish Embassy in Rabat (1986-1991). After completing diplomatic service, Piotr Nurowski tested himself in business – he was director of Commercial Office at PZ Solpol and, subsequently, one of the founders of the first private TV station in Poland, Polsat. In the years 1992-1998 he was member of Polsat’s Management Board; later he was elected to the station’s Supervisory Council. He was also member of the Supervisory Council and President of the Elektrim joint-stock company.

He was a great enthusiast and a sympathizer of sport - equally often seen at the greatest events and championships as well as at local, school and recreational competitions. He proved his dedication to sport being involved in the activities of the „Sport of Children and the Youth” Association as well as the Polish Athletics Development Foundation.

On 27 February 2005, Piotr Nurowski was elected President of the Polish Olympic Committee. In April 2009 he was entrusted this post for a consecutive four-year period. On 17 April 2010, in the year of the Vancouver Olympic Games during which Polish athletes won a record amount of six medals, he was supposed to present a report at the POC’s annual Assembly.

Athletes, sport activists and fans will remember Piotr Nurowski as a huge fan of sport and an operative activist. In 2009 he was re-elected member of the Executive Committee of the European National Olympic Committees - EOC (for the first time in 2005). In years 2005-2009 he was EOC’s Marketing and Communication Commission Chairman.

Piotr Nurowski died tragically on 10 April 2010 in a crash of the Polish presidential plane near Smolensk. The Polish delegation (consisting of 96 people with crew) along with the presidential couple and the captain of the Polish Olympic Committee flew to Katyń, a place of communist mass-murder performed during the 2nd World War, to pay tribute to those Poles who were killed by the Stalinist regime.

Partner of the
Youth Team